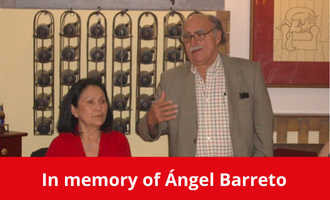 It is with sadness that we report to you the news that Ángel Barreto has passed away.

IIMA wishes to pay tribute to a person who has dedicated his professional life to support technical advancement of the iron & steel industry and specifically DRI & HBI.

Ángel Barreto who was president of the Siderúrgica del Orinoco and a longstanding Director of the Hot Briquetted Iron Association (HBIA), died on Sunday, November 21 at the age of 83.

Barreto was one of the first metallurgical engineers to graduate in Venezuela. He then went on to continue his studies in Italy. Ángel Barreto developed an interest in pelletization and saw its importance in the steelmaking process. He was instrumental in the development of the Sidor AREX reformless direct reduction process which paved the way for the development of HBI.

Alberto Hassan the founding President of HBIA says his colleague and friend “was a staunch promoter and supporter of direct reduction and HBI and served as Director of the HBIA since ­­its infancy in 1998 until its merger with the IPIA to form the IIMA in 2011. As a sign of respect for his knowledge, honesty, straightforwardness, fairness and as a developer of the industry, he was commonly referred to as “Maestro Barreto.”

Upon retirement Maestro Barreto continued practicing his profession and became the promoter and first president of the Guayana Steel Complex, better known as Comsigua.

The IIMA Board of Directors and Secretariat sends on behalf of the organisation its sincerest condolences to Ángel’s family wishing you peace as you grieve this loss.

Photo: Angel Barreto and his wife, Sonia, at an HBIA dinner held in Budapest, Hungary, in 2006

In memory of Ángel Barreto