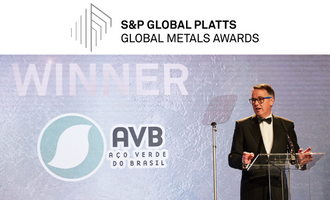 Congratulations to Aço Verde do Brasil (AVB) for winning the ESG Breakthrough Award at the S&P Global Platts 2021 Global Metals Awards. AVB were recognised for their pioneering carbon-neutral steelmaking process which was launched earlier this year following several years of investment and construction of their steel mill in Açailândia, State of Maranhão. The company is part of Grupo Ferroeste which includes Indústria (CBF) who are members of IIMA. AVB is the first producer of “green steel” and intends to increase its manufacturing plant in order to meet demands of new customers and markets. IIMA’s Secretary General, Dr John Atherton attended the awards night to receive the award on behalf of AVB.

Our congratulations also goes to Lourenço Goncalves and Cleveland Cliffs who won three awards, CEO of the Year, Deal of the Year and Metals Company of the Year with citation for the development of their HBI plant in Toledo, Ohio.

In memory of Ángel Barreto